China Beach Holidays
Chinese Culinary Journeys
Chinese Opera
Cruises in China
Festivals of China
Great Wall Treks
Shopping in China
“The best travel experience I've had so far! The guide was very knowledgeable about the destinations and provided us with the best service we could have hoped for. We're already considering our next trip to the South of China!”
C. Hansen

One of the oldest operatic forms in the world, Chinese Opera can trace its roots back two thousand years.

Traditional opera had its beginnings during the Tang dynasty when Emperor Xuanzong established a national troupe called the Pear Garden. And thousands of years after his death, opera performers today are still referred to as disciples of the Pear Garden. Chinese Opera has evolved into over three hundred regional forms and styles that still exist today. 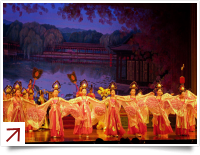 The most well-known is the Beijing Opera, which compared to the Kun Opera which can be traced back to the start of the Song dynasty, is a relatively new form of opera which was established by a troupe from Anhui that was invited to perform at Emperor Qianlong’s 80th birthday in 1790. The Anhui tradition later incorporated other operatic forms from Wuhan and Shansi and the amalgamation of these forms are now known as the classical Beijing Opera.

Although many regional styles exist, four main roles remain in common: the female (dan), male (sheng) , the painted face (jing) and the clown (chou). Traditionally, dan roles were played by men and sheng were roles such as scholars, warriors or officials. The jing roles were heroes, demons, statesmen and others. And the chou was the clown and court jester.

Plays and shows are normally performed during festivals and special occasions, but some traditional teahouses and playhouses still put on short shows.

Chinese Opera in all its many regional forms incorporates singing, dancing, speaking, acrobatics and mime into one performance which often lasts anywhere between two to six hours. Legends and tales from times long gone are told through a series of dance, song and battle sequences where the actors are magnificently made up and clad in colourful, sequined costumes. The singing and music can be high-pitched and jarring to Western ears, and indeed the younger Chinese generation. Appreciation of classical Chinese Opera is most definitely an acquired taste, but if you are having tea in an old teahouse that also doubles as a playhouse, stay for an extra cup and experience one of the most fascinating opera forms in the world.