If you’ve just spent the last few days visiting the Imperial courtyards of the Forbidden City, you’re in for a surprise. The 798 Art District is a stark contrast from the intricate and ornate Forbidden City.

A trendy art community housed in a disused 1950s military factory area, the district is known for its contemporary art galleries, cafes, bars and ranks third after Tiananmen Square and the Forbidden City on most tourists’ must-see lists. Maybe that’s why celebrated artists like Ai Wei Wei set up gallery in the more alternative art community of Caochangdi in another part of Beijing. 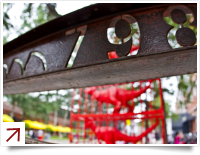 But despite the growing commercial factor, the area still houses some fascinating art galleries and artist studios and offer visitors insight into Beijing’s contemporary art scene. The area is a cultural space where traditional meets modern. Communist-style buildings and warehouses are now home to art installations, coffee shops, book shops, boutiques and exhibitions. Maoist slogans can still be seen etched on factory walls in many of the buildings.

The distinct 1950s Bauhaus-inspired architecture can be seen in the arch-supported sections of the wall and extensive indoor space designed to allow maximum natural light to enter.

Every September, the area hosts the 798 Art District Festival where special exhibitions are curated by leading cultural opinion-makers.