The Lama Temple in Beijing is a stunning display of colours, resplendent frescoes and impressive architecture. 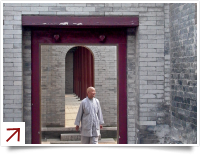 It is the largest Buddhist temple in Beijing and most renowned in all of China. Set on 16 acres of beautifully landscaped gardens, it provides a tranquil respite from the bustling city.

Originally built as a residence for Prince Yin Zhen at the end of the seventeenth century, it later became a religious site when the prince became Emperor Yong Zheng and moved to the Forbidden City in 1723.

The temple became a lamasery in 1744. Monks from Tibet and Inner Mongolia were housed there from then onwards and after the civil war in 1949, the temple was declared a national monument. It was then closed for the next thirty years and miraculously escaped suffering any damage during the Cultural Revolution.

The lamasery consists of five grand and ornate halls separated by courtyards. It also functions as a Tibetan Buddhist centre.