Located just 12km northwest of central Beijing, the Summer Palace was used by the imperial court to escape the heat of the summer in the city. Today the impressive grounds and its palaces are a World Heritage site that not only gives visitors an incredible insight into Chinese landscape design and classical architecture, but also provides Beijing locals with a recreational park just a stone's throw from the city. 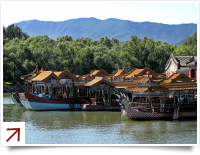 The original Summer Palace was burnt to the ground by the British and French in 1860 during the Opium Wars. The Yiheyuan, usually just referred to as the Summer Palace is what most people visit. The grounds contain a massive public park just outside of Beijing and are certainly worth a visit. Surrounded by hills and an enormous lake, the Kunming Lake, the grounds are a beautiful respite from the busy hub of Beijing.

The Summer Palace was used by the imperial court as a summer base during the hottest period of the year. The most famous member of the imperial family to grace the Summer Palace with her presence was Empress Cixi. She had the palaces rebuilt in 1888 and used navy funds to construct a gigantic marble boat which is still a sight to behold. 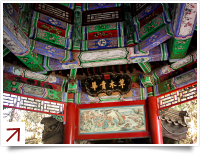 The palaces are situated to the north of the lake and the gardens are beautifully landscaped with noteworthy temples and imperial structures dotting the grounds. Magnificent bridges spanning 150m connect allow passage across the immense lake.

During summer periods, the park is packed with tourists and locals who come here to escape the summer heat. One of the most popular activities is rowing on the lake. Rowboats are available for rent and the many lawns are usually occupied by families and groups of friends having picnics and flying kites. During the winter months, the enormous lake is the site of a veritable winter wonderland with hundreds of skaters weaving about the frozen mass of Kunming Lake.