The Temple of Heaven was built by Ming emperors for making offerings to heaven and praying for good harvests. Located just 2km from Tiananmen Square, the grounds are also a recreational area for Beijing residents. 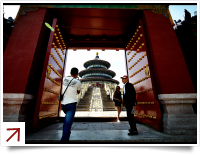 The Temple of Heaven is widely considered one of the best examples of Ming dynasty architecture in Beijing. The grounds contain three temples and the main building with its dome-like spherical wooden structure was built entirely without using a single nail. This temple, known as the Hall of Prayer for Good Harvests, is actually a reproduction of the original which was struck by lightning and burnt to the ground in 1889.

The Imperial Vault of Heaven is an octagonal building also made entirely of wood. It resembles a miniature Hall of Prayer for Good Harvests and is surrounded by the Echo Wall, purported to be a perfect place for magnifying and transmitting sounds. The Imperial Vault of Heaven is connected to the Hall of Prayer by the Vermilion Steps Bridge, a raised walkway. 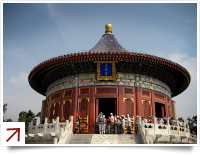 The Round Altar, the third of the temple structures, consists of three raised altars representing man, earth and heaven.

The temple grounds are about 2km south of Tiananmen Square and comprise a peaceful park that is very popular with local residents. Originally conceived as the focal point between heaven and earth, the grounds and temple structures were constructed to bear this harmony and symbolism in mind. For a peaceful outing, come here to soak in the vibe as local pensioners do perfectly synchronised tai chi among kite-flying youngsters and old men drinking tea and playing cards.