Entering the Forbidden City, the centre of Chinese civilisation for six centuries, evokes lasting images from China's imperial past. The palatial grounds and majestic architecture are an awe-inspiring experience that cannot be missed. 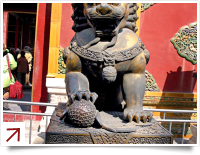 Widely considered to be one of the best preserved examples of Ming dynasty architecture, the Forbidden City or Imperial Palace, spans 74 hectares. It’s surrounded by a 52m wide moat and a labyrinth of 900 buildings containing more than 8,700 rooms are ensconced within the 10m high walls.

The sheer magnitude of the area is hard to ignore, even with thousands of tourists milling about and queuing to have their photo taken in front of the formidable Meridian Gate or Wumen, the emperor’s entrance that used to be forbidden to his lowly citizens.

Passing through the Wumen and across five marble gates is another ceremonial gate, the Gate of Supreme Harmony, or the Taihemen.  This leads onto a massive courtyard where up to one hundred thousand people can be accommodated.  This immense outer court was where imperial audiences were entertained and three grand halls on raised marble structures reside here. The Emperor’s private living quarters were contained within the inner court. 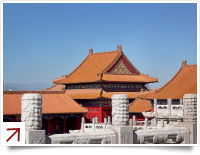 The Imperial Garden is definitely worth a visit if you’re interested in landscape architecture. With structures named the Pavilion of Ten Thousand Springs and the Pavilion of Floating Green, how can you go wrong?! The garden covers about 12,000sqm and was carefully designed to symbolise harmony between the four seasons.