Dating from the 9th to 13th century, the Dazu Rock Carvings are a series of carvings depicting scenes from religious ceremonies, as well as everyday life, with elements of Buddhism, Taoism and Confucianism. 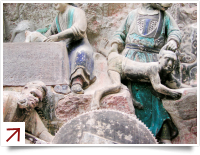 The carvings have been included on the World Heritage list since 1999. Located in the Chongqing municipality, the carvings are situated on steep hillsides scattered throughout Dazu County. The series is made up of 75 sites containing around 50,000 figures and statues.  The two main sites are Bei Shan and Baoding Shan, both close to Dazu town.

The carvings at Bei Shan from 892 AD are considered the oldest works of the Dazu Rock Carvings and feature two groups of carvings with the first one depicting military scenes from the Warring States period.  The second group dating from the 12th century shows statues of Guanyin, the Goddess of Mercy, and a 4m high prayer wheel. The largest scene depicts the Kingdom of Buddha.

The stone carvings at Baoding Shan number 10,000 and were created from 1179 to 1245. The 20m reclining Buddha is the most famous of these carvings. Throughout, scenes depict Buddhist symbols to illustrate Confucian morals. 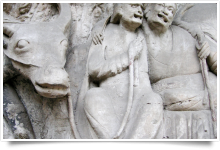