One of the top places to go in China, Guilin, in Guangxi province, is a stunning destination. It is famous throughout China for its incredible karst mountain scenery and the meandering and serene Li River. 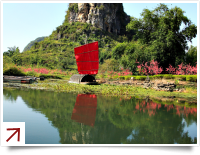 Named after the osmanthus tree, Guilin enjoys the reputation of having China’s most beautiful scenery. The city and its surroundings has been eulogised in countless poems and paintings and not without reason. The idyllic rice terraces along the river, in particular the Longji rice terraces, are printed on 20 Yen bills. The characteristic Elephant Trunk Hill, an archway which resembles an elephant’s trunk, has become the symbol for Guilin. And one of Guilin’s most extensive rock formations are found in Seven Star Park where you can explore the many caves. There are seven peaks which are shaped in the Great Dipper constellation.

There is no shortage of caves for the adventurous traveller to explore. Just 5km north of the city centre, an amazing lightshow showcasing one of the most incredible examples of limestone erosion can be seen in the Reed Flute Cave. 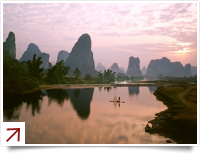 One of the main draws of Guilin is undoubtedly the Li River cruise. Starting in Guilin, most visitors embark on the 4hr and 80km cruise to Yangshuo, a village further downstream. Meandering down this serene river will very likely be the highlight of your China trip. The stunning landscape created by oddly-formed karst peaks, the odd fisherman on a bamboo raft fishing with his cormorant birds trained to catch fish for him, the peaceful waters, the caves carved into the mountainsides and the serene waters will form an unforgettable image to cherish for a long time.

Many of China’s minorities live in this mountainous region, including the Zhuang, Miao, Dong and Yao peoples. Local festivals and customs bear testimony to this diversity.

Discover the enchanting landscape of Guilin and Yangshuo on this 4-day visit to one of China's most stunning regions. Explore the magical karst scenery that has captivated visitors for centuries.
Guilin - Yangshuo - Li River 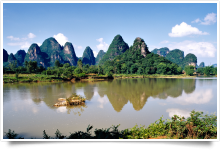