Shanghai’s eclectic mix of colonial buildings and skyscrapers is an enticing hub that simultaneously captures the allure of an ‘old China’ of yesteryear while dazzling visitors with the fascinating modernity of glossy glass facades. 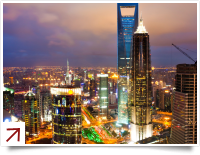 With the Huangpu river separating the ‘old’ and ‘new’ Shanghai, the city is divided in the several distinct neighbourhoods of which the Pudong district is probably the one most depicted on postcards of Shanghai with its impressive skyline and the characteristic Oriental Pearl TV Tower symbolising the wealth and immense development the city has undergone since the early 1990’s.

At first glance, the mightiness of the city can be overwhelming for the first-time visitor, but the city is actually very accessible and walking-friendly. The charming former French Concession neighbourhood with its leafy and broad streets and high-end cafes and shops are a delightful outing for good coffee and cake and window-shopping.

The Bund showcases some of Shanghai’s most famous Art Deco and Palladian buildings and serves up an old European harbour and Manhattan in the 1920’s. Named the Bund (an old Anglo-Indian term bunding meaning embankment of a muddy foreshore), this was a working harbour where everything arrived from small junks to freighters carrying tea and silk to heavy American and Japanese warships. The Bund was old Shanghai’s commercial centre for decades. Now home to numerous hotels, it is definitely worth a walk through. At the end of Nanjing Lu is one of the most famous hotels in China, the Peace Hotel, formerly known as the Cathay Hotel. 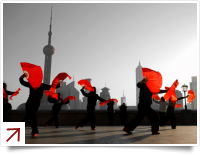 For a journey into Shanghai’s colourful past, embark on a Huangpu River cruise and meander down the river soaking up the maritime atmosphere. Entering the Chenghuang Miao district is like stepping back into Old Shanghai. The two most popular sights there are the Yu Yuan (Jade Garden) and the Huxinting Tea House which are both in the centre of a rather crowded and touristy area but still worth a visit. Just outside the Old City is the biggest permanent antique market in Shanghai – the Dongtai Lu antiques market open daily from 10am-4pm.

Pudong offers a stark contrast to the other side of the river. With its huge injection of government funds in the 1990’s and its special status as a Special Economic Zone, the area has turned from a huge paddy field to a veritable concrete jungle of towering skyscrapers symbolising Shanghai’s immense growth in the last two decades. Pudong used to be the ‘wrong side of the river’ where crime was rife. It now houses the tallest building in Shanghai, the Jinmao Tower which is 421m tall and houses 88 floors with the trendy Cloud 9 Cafe on the 87th floor offering phenomenal 360 degree views of Shanghai.