Pudong’s skyline has become the symbol of Shanghai’s wealth. The financial heart of Shanghai, this district holds an alluring appeal for many Chinese who flock to Shanghai in the hopes of better opportunities and more money. 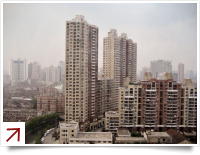 Pudong lies east of the Huangpu River and its most easily recognisable landmark is the Oriental Pearl TV Tower that has graced many a postcard. Built in the 90’s it is still a main attraction especially for Chinese tourists who queue for hours to ride the high-speed elevator to the top for pretty sensational views of the glittering lights of Shanghai.

Before 1990, the Pudong area consisted of muddy farmland growing vegetables for the city’s markets. After huge injections of government money in the 90’s, the area was boosted immensely and became a new Special Economic Zone (SEZ), a title which injected even more capital into the area throughout the 00’s. One of the world’s tallest buildings is the 421m Jinmao Tower in Pudong that also houses the trendy Cloud 9 bar on the 87th floor which offers stunning 360-degree views of the city.