One of the most impressive streets in Shanghai is without a doubt the Bund. With its colossal buildings from the Art Deco and Palladian era, the Bund bears testimony to the foreign influence that dominated Shanghai around the time of the Opium Wars. The Bund was once the financial centre of Shanghai, and bustling working harbour of old Shanghai. 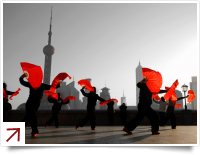 Strolls along the broad promenade of the Bund, situated on the west bank of Huangpu River, offer panoramic views of the skyscraper skyline of Pudong just across the river.

One of the most famous buildings on the Bund, and most celebrated hotel in China, is the Peace Hotel, formerly the Cathay Hotel.  The Cathay wastheplace to be in pre-war Shanghai. With specially imported lavatories and marble bath tubs, staying at the Cathay was the ultimate display of wealth. The neighbouring Bank of China is another equally architecturally impressive building designed in the 1920’s. And perhaps the grandest building is the HSBC building now home to the Pudong Development Bank.

The northern section of the Bund is home to Huangpu Park where the infamous sign, ‘No dogs or Chinese’ was displayed at its entrance flanked by Sikh guards ready to enforce the rule. Only Chinese servants accompanying their employer were allowed to enter and after numerous protests, the rule was relaxed to include ‘well-dressed’ Chinese possessing special entry permits.

Get on the Huangpu River cruise for a scenic journey along the river and soak in the maritime atmosphere of the harbour and river life.