Spanning just an area of four square kilometres, the Old City is an enclave of winding alleyways, food and antique stalls including the largest permanent antique market in Shanghai on Dongtai Lu.

During the era of foreign concessions, this part of Shanghai was known as the ‘Chinese City’ and few foreigners ventured into its walled confines. The city walls have long since been replaced with tree-lined ring roads and many parts of the Old City are now tourist magnets, such as the Yuyuan Garden and Chenghuang Miao and the popular Huxinting Tea House that was one patronised by the Queen of England. 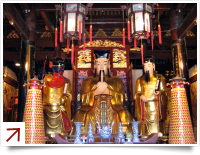 The Yuyuan Garden, or Jade Garden, is a classical Garden reminiscent of the style of neighbouring Suzhou’s garden. Originally built in the sixteenth century, the garden was miraculously spared the ordeal of the Cultural Revolution and has remained intact throughout the passage of time. If you don’t have time to visit the famous Suzhou gardens, a walk through the beautiful walkways, pools, rockeries and undulating dragons made of tiles, in Yuyuan is well worth the trip.

After a leisurely walk through the garden, stop by at the Huxinting Tea House which can be reached across a bridge over a serene lake across the entrance from the Yuyuan.

One of the most popular attractions in the Old City is the Dongtai Lu antiques market. With a huge variety of antiques, some real, some fake, it is a fascinating and eclectic mix of bric-à-brac.