The heart and soul of Tibet, Lhasa is a fascinating mix of a developing city metropolis with new highways and highrises, and a religious hub suffused with ancient traditions and culture. 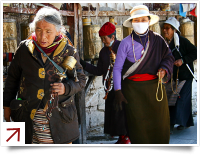 It is also the object of devotion for the many devout pilgrims who travel from afar to pray and make offerings at the holiest of all temples, the Jokhang Temple and to visit the former winter residence of the Dalai Lamas, the Potala Palace.

The spiritual heart of the city is the Jokhang Temple while the Potala Palace soaring in the horizon magnificently dominates the skyline. The parks at the traditional summer residence of the Dalai Lamas, the Norbulingka, are home to numerous festivals throughout the year.

A cultural hybrid that is the visitor’s first stop in Tibet, Lhasa, has retained the spiritual air of yesteryear despite the glossy buildings that have shot up in many parts of the city. Steeped in tradition and religion, this city has held an alluring pull for travellers of all kinds.