A somewhat unprepossessing building at first glance, the air of veneration is palpable as you approach the entrance of the Jokhang Temple. Depending on the time of day, visitors will have to squeeze their way past the many prostrating pilgrims in front of the main entrance by Barkhor Square. 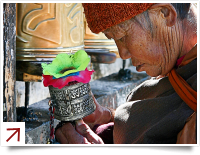 Located in the bustling Barkhor area, the Jokhang’s massive temple doors open into a busy courtyard with monks busily tending to the numerous rows of butter lamps and incense and forming butter statues.

Founded in around 639-647, the Jokhang is the most revered of all temples in the Tibetan Buddhist world. The temple is about one kilometre or so from the Potala Palace and the central courtyard houses the magnificent six-metre-high Padmasambhava statue.  While you’re in the Jokhang, you’ll probably encounter countless pilgrims passing through the temple in a clockwise route and entering each chapel in turn to pray and make offerings.

Climb to the temple roof and drink in the stunning view over Barkhor Square and the Potala Palace in the distance.