The Potala Palace is probably Lhasa’s most striking landmark. Most visitors lay eyes on this immense and awe-inspiring structure for the first time from a distance. 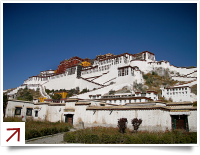 That first moment is one that will keep memories of a Tibetan visit alive for years to come. Work first began on this massive building in 1645. The palace took over fifty years to build and consists of thirteen floors and over one thousand rooms.

The Potala has served several purposes since its construction. Aside from housing all the Dalai Lamas from the fifth to fourteenth, the palace also served as an administrative centre, monastery and seat of government. When the summer palace, Norbulingka, was built at the end of the eighteenth century, the palace became a winter residence for the Dalai Lamas.