The capital of eleven imperial dynasties, Xi'an is teeming with historic and cultural attractions. The famed terracotta army is this fascinating city's main draw. But the old city with its still-standing city walls and beautiful imperial relics such as the Giant Wild Goose Pagoda and Little Wild Goose Pagoda, not to mention the charming Muslim Quarter, all make a visit to the capital of Shaanxi province a rewarding one. 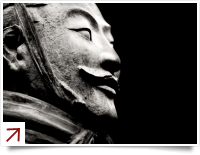 Despite having a population of around eight million, Xi'an is relatively easy to get around. The Bell Tower in the centre of the city marks the crossroads of the four main streets, Bei Dajie (North Street), Nan Dajie (South Street), Dong Dajie (East Street) and Xi Dajie (West Street). When locals refer to their city, they often refer to the old city inside the square city walls and the modern city which is outside the walls.

The main roads mainly follow an orderly grid system, however, when you enter the Muslim Quarter, the streets become narrow unpaved alleyways and a myriad lanes suddenly appear making the area a delightful excursion.

Tiny dumpling shops, rows and rows stalls line the narrow alleys.  And right in the heart of the quarter, you will find the Great Mosque, the largest mosque in China. Enter and be immediately met by the calm that penetrates the grand building.