Two ancient relics worth a visit are the Giant Wild Goose Pagoda and the Small Goose Pagoda. Both temples were built to store sacred Buddhist sutras brought back from India. 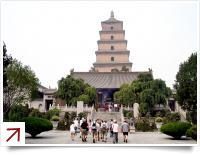 Built in 642 AD during the Tang dynasty, the Giant Wild Goose Pagoda (Dayanta) originally housed Buddhist scriptures. It was originally five floors tall and made of tamped earth and stone walls. It was later rebuilt by Empress Wu in 704 AD who extended the building with another five levels. When an earthquake later severely damaged the temple, it was reduced to its present seven floor structure.  Many visitors throw coins out of the large windows for good luck. So don’t forget to have some change handy!

The Small Goose Pagoda is the other famous pagoda in Xi’an, built around 707 AD also by Emperor Zhong Zong Tang. Originally a structure of around 45m, the same earthquake that damaged the Giant Wild Goose Pagoda, also affected the smaller version so it now stands at 43m. Sacred Buddhist texts were also stored in the pagoda.