Narrow, winding alleys and stalls teeming with steamy hot dumplings and other wares greet you as you enter the busy Muslim quarter in the centre of Xi’an.

The Muslim quarter was the centre for Xi’an’s Hui minority for centuries. The Hui descended from Persian and Arab Silk Road merchants who brought Islam to China. These travellers gradually settled and intermarried in the local population. The Hui minority numbers around 9 million throughout China. In Xi'an, the group numbers approximately thirty thousand. 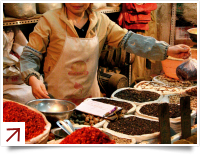 Getting lost in the Muslim quarter is a rewarding way of spending an afternoon. The narrow streets lead you to exciting culinary experiences such as sheep’s brain or perhaps more palatable grilled mutton on skewers. Other than sampling Muslim treats, the bazaar is the perfect place for picking up trinkets and gifts to bring home.

Right at the centre of the district and tucked away in a tranquil garden, is China’s largest mosque, the Great Mosque which was built in 742 and later rebuilt in the Qing dynasty. Architecturally, the building is a combination of traditional Chinese style with Arabic influences. Spanning an area of roughly 6,000sqm, the site is divided into four courtyards. The mosque is a five-minute walk from the Drum Tower.