If you’re travelling to Xi’an, chances are you will be paying a visit to the well-preserved Terracotta Army just outside the city. The army remains one of China's top historical sights ranking up there with the Great Wall and the Forbidden City. 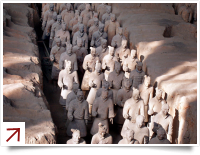 An estimated eight thousand soldiers set in battle formation were created to accompany Qin Shi Huang, the first emperor of a united China to the grave during the Qin dynasty from 221-206 BC.

This incredible archaelogical wonder was discovered accidentally by peasants building a well in 1974. Three vaults were found, each containing warriors in various battle formation. The first vault is the largest, containing roughly one thousand soldiers and roughly ten thousand bows, arrows, swords and spears.

The second vault is slightly smaller and thought to hold even more soldiers. The third vault is much smaller than the first two with only 68 figures and a chariot. Although the Terracotta Army is estimated to be eight thousand strong, only around a thousand have been excavated. If you inspect the soldiers up close, you’ll notice that each soldier has unique facial expressions.