An impressive ancient military defence system, the Xi'an city walls are the most well-preserved walls in China. The 12m-high structure makes it the perfect vantage point for admiring views of the old city centre. 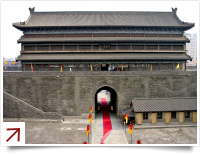 The walls divide the city of Xi'an into the city centre and the outer city area. Erected during the Ming dynasty, the first city wall was made of tamped earth. Later on, the wall was entirely enclosed with bricks and a deep moat was erected around the city. The structure is 12m high, 15m wide on top, and roughly 16m thick and 13.7km long.

The walls are intact almost all the way around the city centre. There are watchtowers at each corner and a gate on each side. The only way for enemies to penetrate the city was to attack the gates. As a result, complex gate systems were constructed. The four gates were named Changle (eternal joy), Anding (harmony and peace), Yongning (eternal peace) and Anyyuan (forever harmony). Yongning Gate, also known as the South Gate, is the most complex and beautiful, and closest to the Bell Tower.

In the 1980's, a strip of parkland was created around the wall providing a recreational area for Xi'an residents. It's also possible to climb the walls and go for walks around the broad walkways along the top. A popular activity is cycling on top of the wall.