The most impressive section of the Yangtze River is known collectively as the Three Gorges.

These gorges consist of the 8km-long Qutang gorge, the Dragon Gate Gorge and the longest of the three gorges, the Xiling gorge. At the end is the much-debated Three Gorges Dam at Sandouping in Hubei province. The dam is one of the world’s largest hydroelectric dams and apart from producing electricity, the dam is meant to increase shipping capacity and reduce the possibility of flooding.

The Three Gorges used to be the Yangzte River’s most dangerous stretch with 200km of rapids and narrow bends. The Qutang gorge is the smallest and most scenic of the three stretching from Baidi to Daxi. The second gorge also known as the Wu gorge is a winding passageway starting at the estuary of Daning River to Guandukou. The final gorge is the longest and with its rapid waters, it was also the most dangerous of all three gorges. But the scenery along the gorge is unparalleled. Beautiful karst scenery, limestone caves, springs and rock formations made this gorge the subject of many works by famous poets such as Bai Juyi and Qu Yuan. 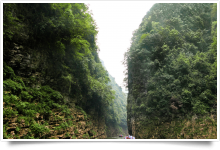