The longest canal in the world, the 1,800km long Grand Canal is, along with the Great Wall of China, one of the country’s greatest engineering feats. 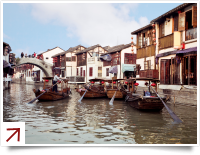 Work on the Grand Canal started around 400 BC, but actual construction and linking of dug-out trenches wasn’t implemented until the seventh century during the Sui dynasty when the emperor deployed as many as six million workers to the canal project.

Originally intended to water the rice basin of the Yangtze and join the fields. When the canal was completed, trade with the southern part of the country was expanded and the canal was extended. As the political centre shifted southwards, and the nation’s capital was established in Nanjing, the canal continued being extended and maintained during the Song dynasty and subsequent Ming dynasty.

The Grand Canal played an important role in Suzhou’s prosperity as it brought increased trade and put Suzhou permanently on the silk trade route. Over time, Suzhou established itself as a major silk production centre and still relies on silk as a main source of income today.

Towards the twentieth century, the canal fell into disuse and today it is mainly in use from the south of the Yangzte from Zhenjiang to Suzhou. A passenger service from Hangzhou to Suzhou shows how important the canal is for heavy industry in this part of China. 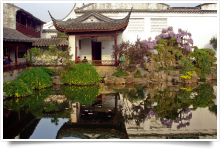 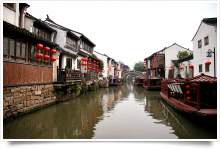