The Great Wall of China

Without a doubt one of the most stunning achievements of mankind, the Great Wall of China, spans a colossal 6,000km across China. 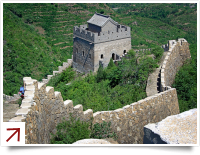 Begun in the fifth century BC during the Warring States period, the Great Wall continued to be expanded and strengthened up to the sixteenth century. Chinese states had walled their cities early on and these fractured walls became the starting point for the great wall when the first emperor, Qin Shi Huang who unified the Chinese empire, joined these loose structures into what would become the Great Wall.

The Great Wall was intended to keep out the barbarians and throughout the Han, Wei, Qi and Sui dynasties, the wall was extended. Throughout China’s imperial history, the wall gained and lost significance depending on the shift in regional threats. During the Ming Dynasty, a majority of the wall was reconstructed. Watch towers were built, barracks for troops and intricate systems for signaling were created. However, mostly, the wall served as a transportation corridor more than a defensive fortification. Despite its original intention, many invasions took place, with enemies crossing the numerous battlements easily.

Today, it is one of the most visited sights in China. Visitors travelling to Beijing can easily view the Badaling section of the wall which is only 70km from Beijing. The first section to be restored, it is also the most popular and congested part of the wall. Simatai and Jinshanling are two sections further north of Beijing making them less popular with Beijing tourists. The Simatai section in particular is incredibly picturesque and peaceful with crumbling parts of the wall adding authenticity to the experience.